Start a Wiki
“David Cage has done more damage to France than its surrender in World War II.” — Pat 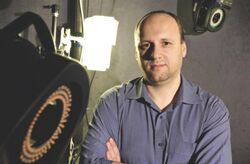 David De Gruttola, known by his pseudonym David Cage, is a French writer and video game "director". He is the founder and CEO of the game development studio Quantic Dream, responsible for writing and "directing" Omikron The Nomad Soul, Indigo Prophecy, Heavy Rain, Beyond Two Souls, and Detroit - Become Human, therefore making him a common subject of ridicule to Matt, Pat and Woolie, often berating the poor writing and plot holes present in his works. Despite this, the three of them have stated that they enjoy the opening sequence of Indigo Prophecy, and Pat has also admitted that Heavy Rain "has moment-to-moment flashes of 'this is pretty good'." In episode nine of the Super Best Friendcast, Liam also stated that he likes Heavy Rain, and has gotten the platinum trophy in it.

Throughout the various playthroughs of David Cage's games, one of the most common jokes made by the Zaibatsu is some iteration of "David Cage is a failure of the game designer". This is meant to mock a comment Cage himself once made during an interview, in which he states "I've always felt that 'game over' is a state of failure more for the game designer than for the player". Specifically, the joke jabs at his hypocrisy and ego, as not only do his games contain barely any actual gameplay, but Indigo Prophecy is also known to have several game overs. Since its dawn, the joke has become one of the most famous ones on the channel.

Some of David Cage's more infamous writing on the channel includes Ethan's blackouts in Heavy Rain (as they are introduced at the beginning of the game, but later completely ignored), the underwater Chinese ghost base in Beyond Two Souls, literally everything after the intro in Indigo Prophecy and banging another man's wife while possessing his body in Omikron.

David Cage makes an appearance during Rustlemania 2 finale, Best Friends All-Star Royal Rumble Invitational, as a wrestler. His French writing skills gave him the edge to beat the majority of the cast, reaching a face-to-face with the heroic Hot Dog Man. Hot Dog Man came out victorious, leaving the director in shame.

“Your shitty ass... I'm gonna lean in for this one...[Woolie leans to the Mic] Your shitty ass garbage fucking game doesn't have the balls to be original, David Cage. The worst piece of shit you have ever made turned out to be a rip-off. How does that make you feel? You fuck! You hack!”
— Woolie in Indigo Prophecy Finale

“Even the Character like: "This is kinda racist".”
— Pat pointing a racist aspect of Indigo Prophecy

“Warning! If you have a history of liking good stories, stop playing!.”
— Matt as the friends start Beyond: Two Souls

“How is this compelling, David?.”
— Woolie pointing out the uselessness of QTE's in a scene in Indigo Prophecy

“How? How? How?.”
— Pat, as David Cage introduces a fire out of nowhere into a scene

“So, what was the point of that scene? Absolutely fucking nothing!.”
— Matt replying to Woolie in Indigo Prophecy

“I love how this has something to do with the story.”
— Matt during the Sparring scene in Indigo Prophecy

“So, those creepy shots that you guys were talking about are Stanley Kubrick shots.”
— Woolie pointing out stolen camera angles shots

“Feeling like you made a big decision, WAY more important than actually making that decision. See the difference between our earlier playthroughs: Heavy Rain, and Walking Dead. You can actually change a hell lot more in Heavy Rain, but do you care? No! Cuz the writing is terrible.”
— Pat during Deadly Premonition

“Not being able to play video games in the video game is a failure of the game designer.”
— Matt in Beyond: Two Souls

“Put your controller down! What are you doing? You think that's a game you're playing?.”
— Woolie, when Pat wasn't allowed to make a decision in Beyond: Two Souls

“Don't you love games that have main characters that just walk right out of the plot?.”
— Woolie talking about Tyler leaving the story, which makes him useless

“This is one of those sad moments where Liam is like: "Come on, guys! It's not that bad!"”
— Matt about Liam defending Indigo Prophecy

“There is a surplus amount of time. That's the problem. He had too much time.”
— Pat

“ With a game like this, it is bizarre you can point to a single person; it is their fault. It's the writer and director's fault. ”
— Pat at the credits of Indigo Prophecy

“ There he is! The guy who talked shit about L.A Noire face-technology.”
— Pat, about David Cage

“The guy that says his priority is not to make games that are fun.”
— Matt, about David Cage

“He just greased himself in honey, he got naked, rolled around his apartment, and whatever stuck to him became the next scene.”
— Woolie

“I think David Cage went to the library, grabbed five books, and then left.”
— Matt

“Because he thinks it's funny. Idiots like David Cage think this is funny.”
— Woolie about racism in Indigo Prophecy

“This continues the theory that David Cage has no idea how anything in mental health works.”
— Pat, during Heavy Rain stream

“So David Cage is the Devil.”
— Pat in Omikron: The Nomad Soul.

“To be fair, how prophetic is this that literally every David Cage game we play, we feel our souls being sucked out?”
— Matt in Omikron: The Nomad Soul. 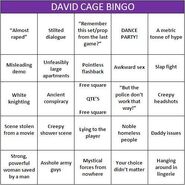 David Cage Bingo
Add a photo to this gallery
Retrieved from "https://zaibatsupedia.fandom.com/wiki/David_Cage?oldid=48930"
Community content is available under CC-BY-SA unless otherwise noted.