Start a Wiki
“You know who's the best level up waifu? Bonfire.” — Pat

Demon's Souls is a Super Best Friends Stream event in which the Best Friends Zaibatsu plays From Software's critically-acclaimed original entry into the Souls series with special guests, German Spy and Plague of Gripes.

“When I put the headphones on, they cover up the bald.”
— Pat

“Just give them more jaws and they'll look cooler.”
— Liam

“Yeah, technical problems on stream. I love it.”
— Pat

“We should just leave the technical difficulties thing on for six hours and call it a night.”
— Liam

“My suggestion would be to hit random until you hit garbage and work with that.”
— Pat

“It looks like he ate someone's ass out.”
— Matt

“It's very likely someone in the stream will invade you with a scraping spear and acid cloud and break your shit.”
— German Spy

“That's the worst. That was a text message calling me a fuckboi.”
— Pat

“Poop Zone one through three. That's the zone that comes before Green Hill Zone.”
— Liam

“They can curve the bullet arrow.”
— Matt

“It's a shame that the Demon's Souls guy didn't know about the glory of vape culture.”
— Pat

“You know who's the best level up waifu? Bonfire.”
— Pat

“The most shits dumped on stream.”
— Woolie
“Are you taking a shit right now?”
— Pat

“I cast level three penis of the infinite.”
— Matt

“Your pronunciation for freshest memes makes me want to throw up.”
— Pat

“Kurt Cobain was so strong.”
— Pat
“He only had one weakness. Shotguns.”
— Matt

“What? Are you guys talking about my inevitable death?”
— Pat

“Everyone out there, skip work and drink.”
— Liam
“That's the responsible thing to do.”
— Woolie

“You go 'Hey kids.' and everyone feels appreciated because you treated them like children.”
— Pat

“Woolie, who's your favorite phantom spice girl? Old Spice or Fresh Spice?”
— Matt
“It's out of my power, but even if it was, I won't.”
— Pat

“I thought you meant he was streaming his dick in his pants.”
— Pat

“Put up your dead Liams.”
— Woolie

“My skeleton, I named it Shadowman.”
— Pat

“Now your asking me if my allegiance is to my people or my job, and, well, that's rough.”
— Woolie
“That sounds like something someone about to be without a job would say.”
— Pat

“The Best Friends haven't that much for me, but then again, neither have black people.”
— Woolie

“Woolie would sell out even the darkest baby for a jetpack.”
— Pat

“You're like a person who can't park their car, but drives it over the gorge no problem.”
— Pat

“Undertale is the Dark Souls of video games.”
— Pat

“I love it when my TV producer comes in my ear, Matt.”
— GermanSpy

“Dark Souls 2 is the best one if you like shitty games.”
— Pat

“I wouldn't attack him with a sword made out of spiders. That's spooky.”
— Pat

“Because your penis is not long.”
— PlagueofGripes

“A house is like a fence that you sleep in.”
— PlagueofGripes

“You know that embarrassing thing where you were writing a tweet but you were just writing in the search bar?”
— Liam

“What was that sploosh noise?”
— Woolie
“An angry monster. It's mad about Casca.”
— Matt

“It resists Plague. You put that on and you no longer feel the need to watch YouTube animations.”
— Pat

“You wanna scare the other guy. That's why samurai put mustaches on their armor.”
— Pat

“There's no choice but to face-fuck in this stairwell.”
— GermanSpy

“How dare you cheat on my girlfriend like that?”
— Matt

“Black is a state of mind.”
— Woolie
“They're Black Phantoms because they're only three-fifths of a Black Phantom, I guess.”
— PlagueofGripes

“Boom! Suck it, German. Spy on this.”
— Pat
“You know he's at a disadvantage because he's watching this ten seconds behind.”
— Matt
“I know. That's why it was so easy to mock him.”
— Pat

“You should get aggro on everyone. Squeeze more content out of this.”
— Matt 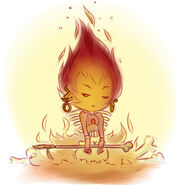 Bonfire-chan by Plague of Gripes

Add a photo to this gallery
Retrieved from "https://zaibatsupedia.fandom.com/wiki/Demon%27s_Souls_(Stream)?oldid=45182"
Community content is available under CC-BY-SA unless otherwise noted.