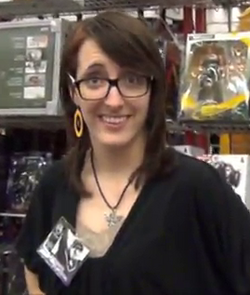 Dork Girl is a title given to the three members of a nebulous group of dorky females acquainted to the Zaibatsu.

The primary Dork Girl (real name Leah) was first mentioned in part nineteen of The Last of Us, and is apparently so dorky that Matt only needed to refer to her as "Dork Girl" in order for Pat to know who he was talking about. Her other dorky friends, first mentioned in episode ten of Rustlemania, are also considered Dork Girls but are of a lesser dork quality.

The primary Dork Girl's earliest appearance can be heard in the Scribblenauts Wii U episode, but made her first credited appearance in the second episode of the Super Best Friendcast, The Feel of a Podcast, being called only Dork Girl the entire time. The other two Dork Girls can be heard for the first time in the Lollipop Chainsaw episode. [1]

Dork Girl cosplaying as FemBaz at Anime North 2014, with Liam in the background 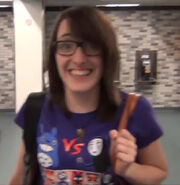