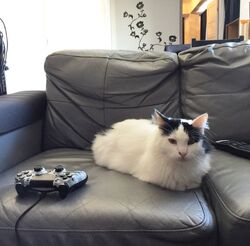 Elmo is Paige's pet cat that Pat has adopted as his son.

Elmo is a eleven year old half Maine Coon cat, found in a dumpster and taken to Tree House Animal Shelter in Chicago, where he was barely even washed up when Paige adopted him. He was brought to Pat's apartment on October 4th, 2016. Elmo has Cerebellar Hypoplasia, causing problems with his back legs, anxiety, which causes him to chew off patches of his fur, and OCD. Whenever Elmo does something weird or dumb, Pat and Paige insist that "He's doing his best!".

“Elmo very much resembles a bike horn with legs today. Every single meow sounds like a honk.”
— Pat [2]

“Oh, what a good boy. He's done nothing, but he's a good boy. You know why? Cause he's the best child ever. I sometimes think about people with real children, like, human children, and wonder if they can feel even a smidgen of the love we feel for Elmo. And the answer is no. They could never.”
— Pat [3] 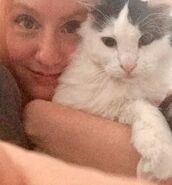 Paige with Elmo; Image uploaded to Twitter on October 6, 2016

Elmo, along with Pat, Paige, and Skelmo in a family portrait in the intro to Resident Evil 7: Biohazard

"The original baby arrives to demand his attention #elmoments and maybe to gloat over crated new baby zangief" - Pat, Aug 11, 2020.

Fan art of Elmo by Mothman in the style of the square livestock paintings Pat loves/hates
Community content is available under CC-BY-SA unless otherwise noted.
Advertisement