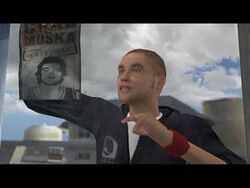 “Eric, what the fuck is wrong with you?” — Woolie

Eric Sparrow is a main character in Tony Hawk's Underground. He is theorized to be the alternative universe Griffith to the main character's Guts.

Eric and Lil' Woolz were childhood friends while living in their hometown in New Jersey. At first Eric seemed to be your normal "cocky knucklehead" kinda guy, but he reveals the first signs of his inner douchebag by torching the drug dealers' cars, causing him and Woolz to bail out, kill a police officer with Woolie's sick grinding and escape to New York. To get sponsored, Eric set a taxi ablaze and made Lil' Woolz make sick tricks over it. After that Eric manages to sign himself and Woolie up for a skateboarding contest and kill 10 billion Tampa cops, but it turned out he actually didn't mention Woolie at all and stabbed him in the back. After Eric filmed Woolz doing sick tricks over the helicopter in Hawaii, he cut his part and put himself in the pro contest in Vancouver, but Woolie still won in the end. After that a drunk Eric hi-jacked a tank in Moscow and managed to get away with it, becoming a member of the Godhand, while Woolie was left to rot in Russian prison. But after Woolz manages to come back, Eric taunts him with a tape filmed in Hawaii and challenged him to a skating duel, but he was beaten like a bitch and left in a ditch.

In the second arc of the adventure, Woolz and Eric get involved into a war, known to mere mortals as "World Destruction Tour", between two insane deities, Tony Hawk and Bam "Bam" Margera. Woolz gets into Tony's team, while Bam makes use of a weakened Eric, who seems to have been stripped off of his Godhand powers, becoming a simple chode. The conflict between the immortals lasted for a long time, and Woolie and Eric had to switch teams once, but while Woolz shredded with the Smokin' Sick Style, Eric managed to crash into a music band, perhaps even sacrificing a tuba player to the God of Evil. But that didn't help him, and he was kicked out by Bam and crushed under a massive bottom of Nigel Beaverhausen. On that note, the story of despicable Eric Sparrow has reached its miserable end... or has it?

“They have Eric in the back room, and they're doing the Casino Royale ball-smashing in the background... and Eric's like "Hey, this is crazy!".”
— Matt

“People always ask me, like, "Why is Eric Sparrow such a fuckin' cock?".”
— Matt

“I could've sworn that Eric signed up with Behelit Skateboards.”
— Woolie
“Yeah, I was thinking that too.”
— Matt
“Y'know, I'm pretty sure that video they showed of him doing a sick-ass Darkslide to the castle in the sky kinda convinced him.”
— Woolie

“Okay, he's creating fire! Dude, this is what happens when he becomes part of the Godhand!”
— Woolie

“The number one unforgiveable of all time, the greatest villain history has never known... Eric fuckin' Sparrow! May no one remember your name.”
— Woolie

“It's unclear whether Eric Sparrow is alive or dead.”
— Matt
“That might be the end of his tale... or he will rise again.”
— Woolie

“Okay, there's an actual chance that Eric Sparrow might become a demon god.”
— Woolie upon unleashing Baron Samedi on New Orleans
“I feel like Eric Sparrow has edited this video to make us look dumber.”
— Matt

"I WILL NEVER FORGIVE YOU!"

Eric gets his comeuppance by the other player's hand

Eric Sparrow in the intro to Tony Hawk's Underground 2

Artist: aesthetic-derelict
Add a photo to this gallery
Retrieved from "https://zaibatsupedia.fandom.com/wiki/Eric_Sparrow?oldid=50569"
Community content is available under CC-BY-SA unless otherwise noted.