“Hey, this game was made with money, and it came out on a system that people owned, and some people liked it, so FUCK THAT.” — Pat as James Small

James Small is an acquaintance of the Best Friends who is often mentioned and ridiculed on the show. This has become a running joke, and made him quite infamous with fans of the show.

James mentioned his wiki page on Friendcast Episode 97, where he made his first credited appearance on Zaibatsu Media. He claimed he was not the man driving the Shame Car and he has never appeared on the channel up until then.

James Small was instrumental in getting the Metal Wolf Chaos full Let's Play going and as such, 2016 is known as "The Year of James Small" in the Zaibatsu chronology in his honour. 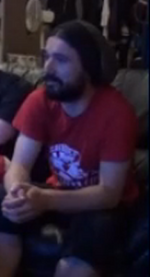 James Small hates the PS2, and believes the Dreamcast is the best console ever, something he is reputedly fixated on reminding people of in between cups of tea with biscuits on the side. He will even go as far as refusing to play any PS2 games. These two facts make him the butt of many jokes throughout the show. He is also super butthurt about his wiki page, as confirmed by Matt and Pat in Metal Gear Rising: Revengeance and The Walking Dead.

Matt first met James Small at his first QA testing job, where Small was lead tester. Since quitting that job, he ran into Matt frequently and even did some work with Woolie. All of this is according to Matt on AMA on Reddit.