Kamina is Woolie's first Pokémon in Pokemon LeafGreen, and his most powerful in Nuzlocke Challenge: Road to the Final Victory.

In part one, Woolie immediately went to the middle Poké Ball and selected Squirtle, thus beginning his adventures with DMX. He was promptly named Kamina, inheriting his spirit and beating Ja Rule's Bulbasaur in his first battle a few minutes later.

After defeating Lass Sally in part four, he evolved into a Wartortle, at which point he was given poorly photoshopped Kamina glasses. At this point, Woolie continued to lament his lack of a Giga Drill Breaker, hoping he would one day get it in the form of Hydro Cannon.

In part twenty-one, Kamina swept Biker Lao's party and grew to level thirty-six, thus evolving into his final form, Blastoise. From that point on, his mouth would forever remain hung open, until the hypest day in his life when he beat the champion and was so amazed, he finally learned to close his mouth.

Though many lives were lost, the final battle against Ja Rule was eventually won when he threw out his final Pokémon, Arcanine. Being weak to water, Ja Rule's Arcanine was one-shotted with a single hydro cannon blast, making DMX grand champion. 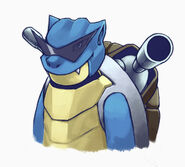 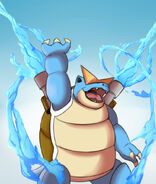 Artist: Is Leon
Community content is available under CC-BY-SA unless otherwise noted.
Advertisement