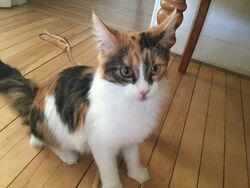 Leeloo is Matt's second pet cat that was adopted as a friend for Zach.

Leeloo upon arriving at the McMuscles household

Leeloo with Matt's coveted Luuup. Uploaded to Tumblr on Aug 9, 2016

Artist: Sylphy
Add a photo to this gallery
Retrieved from "https://zaibatsupedia.fandom.com/wiki/Leeloo?oldid=49509"
Community content is available under CC-BY-SA unless otherwise noted.