“If you don't like anime, what's wrong with you? Really?” — Liam

Liam Allen-Miller is a former member of the Best Friends Zaibatsu along with Matt, Pat and Woolie and eternal Employee of the Month. He was the fourth official member, debuting during the old school playthrough of Metroid Fusion, which he single-handedly saved by trolling the SA-X with masterful skill.

On December 23, 2016, Liam announced that he was leaving the Super Best Friends due to health concerns with his anxiety.

Liam was the fourth member of the Best Friends Zaibatsu. Out of the four Best Friends, Liam is easily the least talkative and the most nervous. He is quite skilled at video games and has only exhibited noticeable salt on camera in the Pacific Rim video. He has however never been part of any Super Best Friends Brawl to date, either due to declining invites or because of being unlikely to catch up in the standings. According to Pat, Liam hasn't been in any Brawls because it would ruin the dumb bullshit of a three man fight.

Liam's most distinctive feature is his obsession for all things Japanese such as Japanese video games, food and anime and has been repeatedly referred to as a "weeaboo" because of this. A running gag in the series is that whenever something remotely related to anime is brought up or seen, Liam is quickly considered to be related somehow. It was revealed during the Chrono Trigger playthrough that Liam and Woolie have a strange, almost-bordering-on-too-close relationship. Liam refers to Woolie as "Big Papa" and Woolie refers to Liam as "saucy" frequently and it freaks Matt and Pat out.

“Silver is a clear? What kind of rinky dink operation is this?”
— Liam[src]

“You can't have a bath without candles!”
— Liam[src]

See the rest at the Liam's Quotes page 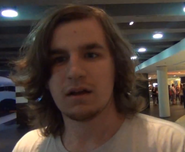 Liam at the Zelda Orchestra Symphony