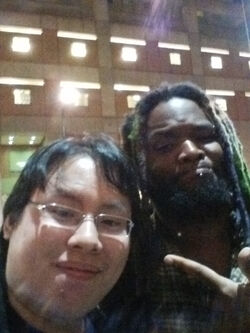 Mike0Dude is a moderator of the Two Best Friends Play subreddit and a known associate of the Best Friends Zaibatsu. He is notorious for sending Woolie a copy of ReBoot for the PlayStation, the playthrough of which he appeared in for parts eight onward.

A selfie of Mike and Pat in 2014.
Add a photo to this gallery
Retrieved from "https://zaibatsupedia.fandom.com/wiki/Mike0Dude?oldid=47830"
Community content is available under CC-BY-SA unless otherwise noted.