Start a Wiki
“So the thing I'm getting here from everything we're seeing is that we're only gonna earn victory through blood.” — Pat

Nuzlocke Challenge: Road to the Final Victory is a Super Best Friends Stream  episode and follow-up to the Pokemon LeafGreen full Let's Play. Woolie, Matt, Pat and Liam all made appearances during the stream's run and Liam cooked food for everyone, like any good waifu would do.

“Look at me talking trash to something fifteen levels below me.”
— Woolie

“You wanna take a left at Boob Village, and hang a right at Dat Ass Boulevard.”
— Matt

“Anti-push the balls? Push them back up?”
— Woolie

“I don't like when the weight of a human being is required to pull something out of me.”
— Woolie

“Stay tuned to when Liam butts in and it just turns into a Cooking Mama stream.”
— Matt

“Fast forward plus bike is too much tech.”
— Woolie

“Put up Luda so he can put some people to sleep.”
— Woolie
“Yeah, with his rhymes.”
— Matt

“Males in the animal kingdom get in there, and peace out immediately.”
— Matt

“Remember that time Pat shot sludge at a kid?”
—

“His body has no consistency to it, again, not unlike Pat.”
— Woolie

“Do you require three out of four balls or three/fourths of a ball?”
— Woolie
“That's up to the viewers.”
— Matt

“Can one ever truly fuck up Fred Durst words?”
— Woolie
“Apparently, yes.”
— Matt

“I want Fred Durst singing "Fly Me to the Moon".”
— Woolie

“You fuck up our production by dying you piece of shit. How dare you.”
— Woolie
“Way to Paul Walker it.”
— Matt

“This is going as bad as it's supposed to go.”
— Woolie

“You stuffed a pepper with deer meat!?”
— Woolie

“Double-edge sounds like one of those two sided techniques.”
— Pat

“I am the lemonade god. No man on Earth has more lemonade than I. So it is written, so it shall be done.”
— Woolie

“I think I'm fitting in just fine by not knowing anything.”
— Pat

“God, like, the instant I came in here, waifu wars started. Like, for fuck’s sake, people, just deal with the fact that Rise is better.”
— Pat

“I'm gonna say you're gonna get through three.”
— Pat

“Considering what I'm seeing in the chat and you tell me to check my PP, I just...”
— Pat

“Play that flute DMX. Don't fuck up the notes.”
— Woolie

“So the thing I'm getting here from everything we're seeing is that we're only gonna earn victory through blood.”
— Pat

“We're doing it for Ludacris!”
— Woolie 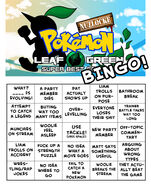 Woolie toasts to Luda at the Zaibatsu's victory dinner, July 27, 2014

Start a Discussion Discussions about Nuzlocke Challenge: Road to the Final Victory