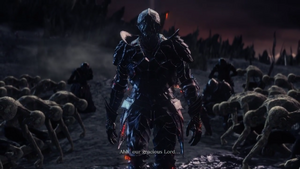 “That's what happens. Oh boy!” — Mantra of the House of Luck

PAT-TRON 4000, also known as "Lucky Ted", is the name of Pat's created character in Dark Souls 3.

The history of PAT-TRON "Lucky Ted" 4000 is shrouded in mystery but stories of his unparalleled luck have already been spread throughout the kingdoms. Supposedly he once had a group of prepaid prostitutes show up at his house thinking he was a different guy named "Lucky Ted" and it is said he commonly gets extra levels from the Shrine Maiden due to clerical errors.

With the help of his mocking spirit guides, Matthew and Woolsworth III, PAT-TRON 4000 began his adventure into the Kingdom of Lothric, quickly gaining an unquenchable thirst for souls. Often his spirit guides would leave him only to come back and find he had grown considerably larger from the massive amounts of souls he harvested while they were away. His hunger for souls was likened to Smough's hunger for flesh and this often brought ridicule from other Unkindled.

PAT-TRON 4000 met many strange people along his journey but none more so than Yoel of Londor, who after failing to kill himself, allied with PAT-TRON 4000 and began drawing out his true strength and creating dark sigils within PAT-TRON 4000. After using his services multiple times, PAT-TRON 4000 would return to Firelink Shrine one day to find him dead and a new ally, Yuria of Londor, taking his place. She told PAT-TRON 4000 of his destiny of becoming the next dark lord and how he should call upon the guidance of Woolsworth III in order to continue down the true path.

After conquering the heartiest of foes, from the Silver Knights of Anor Londo to the skeleton balls (DADADADA DA DADA!) in the Catacombs of Carthus, and overlooking numerous treasures along the way, PAT-TRON 4000 would eventually succeed in returning the Lords of Cinder to their thrones and gain entrance into the resting place of his final reward.

With the defeat of the Soul of Cinder, PAT-TRON 4000 had finished his quest and finally had the First Flame within his grasp. With Yuria's words clear in his mind and the sacrifice of his wife Anri heavy in his heart, PAT-TRON 4000 absorbed the fire and plunged the world into a never ending darkness. With his newly gained power surging within him, the Dark Lord Lucky Ted left the kiln, and took his place as the Lord of Hollows.

Lucky Ted sat dormant in his shrine for what seemed like ages until word reached him of a strange knight praying in the Cleansing Church. Upon speaking to the knight, Lucky Ted was shown a scrap of painting which sucked him into a land of ice and decay known as the Painted World of Ariandel. Having nothing better to do, Lucky Ted quickly began massacring the paintings residents, eventually discovering that the entire painting could be destroyed with the introduction of fire. Arriving at the settlement of Claw-Fucker Bird People, Lucky Ted avoided being married to a rotting bird carcass and instead opted to join the cranberry loving Kru Krux Kran.

Add a photo to this gallery
Retrieved from "https://zaibatsupedia.fandom.com/wiki/PAT-TRON_4000?oldid=49727"
Community content is available under CC-BY-SA unless otherwise noted.