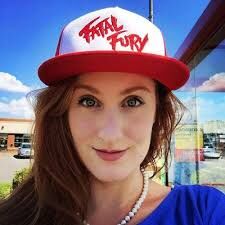 “Everyone's telling me to stop beating you. Woop woop. There's the sound of police.” — Paige

Paige is an American voice actress. She gained her own fanbase when she started reading bad fan fictions on Periscope. She later moved her streams to Twitch and began incorporating games such as Asagao Academy and Bloodborne. Paige once fought Pat over the ham in his sandwich and is known to get mustard everywhere.

Pat proposed an engagement to Paige on February 22, 2021. Her response to this was "Fuck yes!"

“I think the shit in your ass has gone to your brain.”
— Paige

“I feel so bad for everyone who's ever met me.”
— Paige

“"How would you react if you and Pat were out for dinner, you went to powder your nose, and came back to see a hot redhead flirting with Pat?" Is he looking in the mirror and talking to himself?”
— Paige, responding a donation message by thatbitchjessica 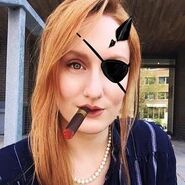 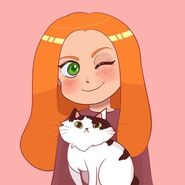 Paige, along with Pat, Elmo, and Skelmo in a family portrait in the intro to Resident Evil 7: Biohazard
Add a photo to this gallery
Retrieved from "https://zaibatsupedia.fandom.com/wiki/Paige?oldid=52879"
Community content is available under CC-BY-SA unless otherwise noted.