“Fire Alarms are for babies who can't handle being on fire.” — Pat

Patrick Boivin is a Twitch video game streamer a former member of the Best Friends Zaibatsu, along with Matt, Woolie, and Liam.

His Twitter account is @PatStaresAt. Pat previously used the account name AngriestPat, but following many years of therapy he changed on Feb 5, 2020 to match his Twitch brand.

During the Super Best Friends era, Pat was Matt's foil, and as such, was much angrier and arguably better at video games. He prefers darker and edgier games, whereas Matt plays babby games. He is smarter, despite his self described "Mind Goblins" (aka, his OCD), though Matt sometimes outwitted and trolled him, which Pat couldn't stand.

He is a self-described survival horror aficionado who loves old school survival horror games with tank controls and fixed camera angles. He is the best controller button masher in the entire world; none are better than Pat at repetitive hand motions. He is also an advid fan of MMO's or games that are similar to MMO's (ie. Final Fantasy XIV: A Realm Reborn; Warframe; Monster Hunter World.) His anger does go overboard at times, such as when he yells at inanimate objects, his disabled and blind Sister/Girlfriend/Clone, and his also disabled cat. He is also very cynical, which often conflicted with Liam's extreme optimism, as well as common sense.

See the rest at the Pat's Quotes page 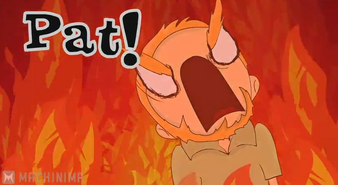 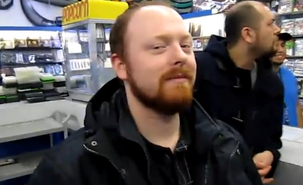 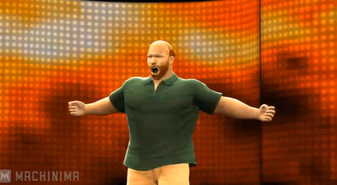 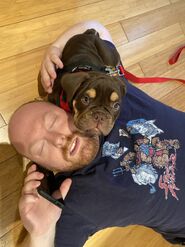 "Happy #InternationalDogDay! My english bulldog puppy Zangief is 12 weeks old and half of his body weight is pee. He fears only the rain and literally his own shadow but enjoys chewing his magikarp, eating leaves (or anything really), and attention just like his father." Paige, Aug 26, 2020 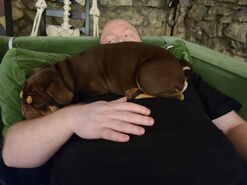 "Help I'm on @PeachSaliva and I cannot move because dog #goodgriefzangief" Pat, Sep 5, 2020.