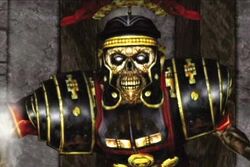 “Pious, you dick!” — Pat, several times over the course of the Eternal Darkness Let's Play.

Pious Augustus is the secondary antagonist of Eternal Darkness and arch nemesis of the Roivas family. He also happens to be pretty much every evil fucker in history from Genghis Khan to the orchestrator of WWI (and heck, probably even the Origami Killer). Matt and Pat eventually spoil all of his fun by defeating him in their Let's Play and putting an end to his evil shit once and for all. 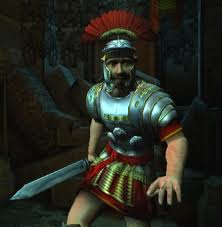 Once a pretty badass Centurion, Pious got mixed up with the wrong Hood when he tried to pal up with the Elder God Ulyaoth and bring about an Eternal Darkness upon mankind. Despite his general capacity to get shit done when going about business personally, Pious seems to procrastinate a lot and mostly just tries to suck up to Ulyaoth only to be shot down and insulted by his less than cordial master. Despite looking metal as fuck, Pious quickly establishes himself as a massive dick, a point the Two Best Friends make reference to repeatedly over the course of the playthrough.

Retrieved from "https://zaibatsupedia.fandom.com/wiki/Pious_Augustus?oldid=40370"
Community content is available under CC-BY-SA unless otherwise noted.