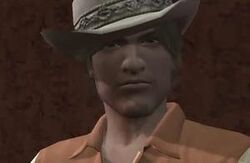 “Of all the games I've played, Quint is my most vicious nemesis.” — Pat

Quint Dunn is a character from Deadly Premonition whom Matt and Pat despise. He has even been referred to as "the new Kenny" by Matt, though Pat believes he is way worse.

Pat wants to systematically dismantle and remove everything Quint lives for, leaving﻿ him a broken shell of a man, just as Quint did to him.

Quint Dunn frequently trolls the Best Friends throughout the Deadly Premonition Let's Play. On multiple occasions Pat tries to search his trailer for clues. At one point (part thirteen), he can be seen eating in the diner behind Thomas MacLaine, much to their chagrin. Later (part fourteen), his house was closed, even though he was inside and it was raining out. When Pat peeked inside, he wasn't there. Throughout the playthrough, Pat passed the time by smoking outside of his trailer. One of his more humorous moments is when he glitches back and forth in attempts to enter his trailer. This includes floating in mid air, awkwardly warping back to his original position and flying through the door of his trailer (part ten and eleven). In part twenty-one of the playthrough, Matt and Pat witness Quint floating outside his car door, but somehow still operating it. In part thirty-three, Quint returns as a zombie, and Pat tries to kill him. This results in a game over, however.

“He's is the greatest villain that we ever fought in the best friends.”
— Pat talking about Quint

“I ruined his marriage and now I stole his car!”
— Pat

“You should trade faces with him.”
— Matt

“Shiiit! Quint's causing more shit 'cause I fucked with him! 'Cause I ruined his marriage and stole his car! And his wrench!”
— Pat