“Yeah, that freight train that hit you? That was ME!” — RAGE

RAGE (also known as Rage "Frequency Vibrations" of Africa or simply Freq) is Woolie's elaboration on his brother's created character, who was first featured as the main protagonist in the Cryme Tyme LP of Def Jam Fight For New York, and later fulfilled the same role in NBA2k16: Livin’ Da Dream.

6'7'' tall and weighing in at 260 pounds, RAGE's fighting style is wrestling (later mixed with streetfighting and martial arts), chosen because Woolie's brother's favorite move was always the Power Bomb. He has a gruff voice, and is sometimes characterized by Woolie with an African accent.

Once upon a time, there was a big black man. He was really angry. There's a plot twist: he gets more angry at some point, and his eyes turn red, becoming True/Shin Rage. He was a basketball player in his youth going under the name Frequency Vibrations (shortened to Freq), which somehow involved ghosts. He was aided in his endeavors by his parents and sister Cee-Cee, Dom Pagnotti an Italian mobster masquerading as a sports agent, a NPC girlfriend called Yevette, and his adopted brother Vic. After many trails and tribulations (mostly caused by Vic who turned about to be an ungrateful, selfish, and manipulative shit) Freq became a NBA free agent after Vic's death via car accident. Later in his NBA career Freq accidentally sent his parents to Kingston during the political season, and they are missing and presumed dead. Cee-Cee got cancer and died because Freq could not perform enough free throws to save her. Dom Pagnotti returned to Vice City to work under his cousin Tommy Vercetti. Yevette was cast into the undead asylum of Lordran where she remains to this day. Vic's still living head was able to kidnap and attach itself to and take over the body of Freq's child, he continued to be a shit for over 100 years until he was finally stopped by Freq's great-great-grandson Hoops Barkley. Freq was eventually blacklisted from the NBA after everyone realized he was not actually that good of a player, the stress of losing a stable income combined with undiagnosed alopecia resulted in Freq losing all his hair. During these dark times he pursued a brief backyard wrestling career and went through a chubby phase, where he was known as Fatty Rage. On a cold December night Freq, met a man named D-Mob, and the true story of Rage began. He was recruited as one of D-Mob's many street soldiers, and played a key point in reforging his empire over the New York underworld by defeating his greatest rival, Crow Dogg. On his way to the top, he also managed to defeat the most hated and vile of all Montreal rappers: Bless.

RAGE has been described basically as "black Heihachi". According to Woolie, he isn't actually hood, but rather an ancient evil and a sort of fighting deity. He is known for being extremely irritable, showing unrivaled ferocity in battle and not understanding normal human emotions, such as fellowship or love. While dating in Def Jam, he was under the impression that his girlfriends were simply his evil minions, and interpreted all of their sexual advances as foreign and utterly puzzling fighting techniques.

“He is BIG and BLACK and BALD.”
— Woolie

“He doesn't need to look at the watch because the time of the day is always ARMAGEDDON!”
— Matt

“This one time Rage got some girl pregnant and she gave birth to a delicious 16-ounce steak. The afterbirth was sauteed mushrooms!”
— Video description

“Before RAGE became the man we knew, he was a little chubbier and he fought off lot lizards.”
— Woolie

RAGE in the foreground, as depicted by Liz Lee in the title card for the full Let's Play.

Rage after being customised by Matt in part one.

RAGE in the intro to Super Best Friends Boxing: The Fighting 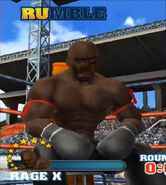 RAGE in Saints Row: Gat Out of Hell

RAGE in the announcement video for Rustlemania 2: SuperBrawl Saturday III

Fatty RAGE in Backyard Wrestling Don't Try This At Home! 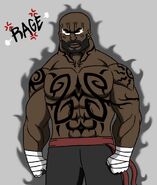 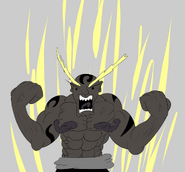 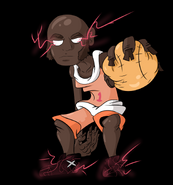 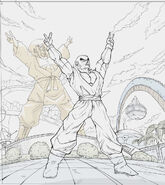