“Did you see those dirtbags started a wiki article about every time I fuck up!?” — Pat

“The most complete party ever thrown!”
— Playlist description

“We gotta remember when the dumb moments are, and shut our stupid, stupid whore mouths. I can't just keep jamming Resident Evil in my whore mouth.”
— Pat

“In fact, you get rewarded for animal cruelty. No wonder this is Woolie's favorite Resident Evil.”
— Matt

“Remember when we said we'd never do this because the game is too good?”
— Pat

“Remember when we played this last, and you accidentally killed the guy?”
— Matt

“You know what they say about fish with big mouths... they're easy to catch.”
— Pat

“Too bad your chainsaw doesn't have a scope, you fucking turd!”
— Matt

“... cause who's never wanted to suplex an evil priest? It's the American Dream, really.”
— Matt

“I need more goat testicles, in my mouth.”
— Pat

“Draw a butt, and if you get an erection, you may have a problem.”
— Pat, quoting advice from Plague of Gripes

“Can you see them? Why am I physically getting off the couch to look?”
— Matt

“I wonder if the penetration of the Punisher...”
— Pat
“I always ask myself that same question!”
— Matt

“Learn how to swim kids... If you don't know how to swim, learn how to.”
— Pat
“What happens if Waterworld happens? Then you're fucked!”
— Matt

“How rude. I can't believe you were talking about my weird monkey ears!”
— Matt

“I am just dripping with flash grenades.”
— Pat

“And now the viewer will think they could do it better.”
— Pat

“Your dad gave me permission to beat you.”
— Pat, to Ashley
“Thanks Obama.”
— Matt

“Ashley wanted to spend her time with a guy that doesn't get her asshole maced.”
— Matt

“I was actually thinking, should I reload my save file to get back those four shotgun shells?”
— Pat

“I assume the snake ate the chicken egg, and there's not some sort of weird snake/chicken hybrid running around.”
— Matt

“If I went to church and the dude was pile driving like, a dummy of Satan....”
— Pat

“When I say you have to fight invisible enemies in a survival horror game, you'd probably go, 'Fuck you and fuck that!'”
— Pat

“Why are we making fun of blind people?”
— Pat

“He just got done with the coitus, and he calls her 'fuckface!?'”
— Matt

“Did you see those dirtbags started a wiki article about every time I fuck up!?”
— Pat

“I hope you didn't accidentally sell me anything too early, Stranger.”
— Matt as the Merchant

“No Matt, no kisses. This is Resident Evil 4 not Kisscraft.”
— Pat

“Problems are about to be solved... with this shotgun.”
— Pat

“I think you should make it the most disorganized ever.”
— Matt about the attache case
“Just start flipping guns upside down.”
— Pat

“Ada, are you first-basin' it with that piece of loose leaf?!”
— Matt, as Leon in response to Ada's kiss mark on her letter

“These carrots are delicious.”
— Pat

“Is that your trouser snake or is that some weird fish?”
— Matt

“The dolphins trying to get its dick wet, which is weird cause it's in the ocean.”
— Pat

“That's how you determine best friends. When you drink and somebody goes too far and you forgive them.”
— Pat

“They can eat whatever they want and never gain a pound. I'm so jealous.”
— Matt, on Regenerators

“They bat their eyelashes, and when you look down, your dick is gone.”
— Matt

“The hotter the female spy, the less trustworthy they are.”
— Pat

“Maybe he'll forget his entire plan if my burn is sick enough.”
— Matt

“Well, I'm glad that this super flawless RE4 run is nearly over.”
— Pat

“Go up there and look up your own dress.”
— Matt

“We should just make Liam wear heels.”
— Pat
“All the time?”
— Matt
“Yeah! As opposed to all those other times he wears heels!”
— Pat

“This is me physically backtracking opinions.”
— Pat

“I would download the fuck out of a car.”
— Pat

“I think you're just mixing the Will Ferrell-verse intro Anchorman.”
— Pat
“Hey kids, one day, when you're an old guy, you'll be like, "Ah, crap"”
— Pat
“Please stay tuned for our full LP of Resident Evil 4 with the Chicago Typewriter.”
— Matt 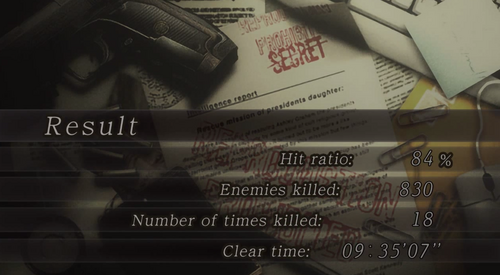 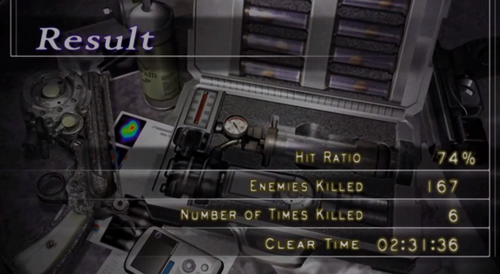 “So, this game has a completely fucked sense of progression because you fly through all the way to Chapter 4...and this is Chapter 4-1, right, of 5-4. There's only 5-4, but from 4 to the end of 5 is more than, like, two thirds of the game. ...I feel like they did that numbering just to fool you and provide value.”
— Pat

Animated "That looks so bad!"

Pat's attache case in part nineteen
Add a photo to this gallery
Retrieved from "https://zaibatsupedia.fandom.com/wiki/Resident_Evil_4_HD?oldid=51776"
Community content is available under CC-BY-SA unless otherwise noted.