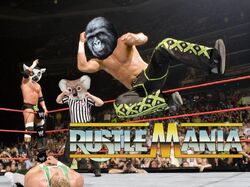 Rustlemania is a series of videos that Matt, Pat and Woolie uploaded throughout August 2013, featuring a different wrestling game every day. The entire series can be viewed in this playlist.

Resulting in the Best Friend's jimmies coming in at a 48.3% Rustled Rate for the month.

A highlight reel covering all the Rustlemania episodes was released September 11, 2013, called The Best of Rustlemania.

A picture from Two Best Friends Play Slender: The Arrival at frame 13:03

The title card for WWE Raw 2
Add a photo to this gallery
Retrieved from "https://zaibatsupedia.fandom.com/wiki/Rustlemania?oldid=35328"
Community content is available under CC-BY-SA unless otherwise noted.