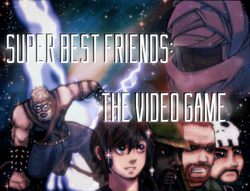 Super Best Friends: The Video Game is a turn-based RPG made by Jpdoctor117 in RPG Maker VX Ace. The first part of the game, simply titled "Prologue", was made available for free download on June 18, 2014 and can be downloaded from the link in the description of the release trailer for the game. The main game is currently in development.

All news and updates for the game can be found at the Facebook page.

The prologue opens with secret agent Matt dropping from a plane to prevent terrorists from destroying America's lead supplier of Ice Cream Sandwiches and save Miss Stone. After completing the HALO jump, Matt commences Operation Bone Stone. After an unsuccessful sneak attempt, Matt is attacked by the guards one at a time. During the second encounter, the player will receive a tutorial on how to use the Hype system. Once in the facility, Matt finds a large number of guards and Mecha Gears. To avoid detection, Matt uses a cardboard box. After climbing the stiars and heading the end of the hallway, Matt finds a room with whom he believes to Emma Stone inside. To his dismay however, it's just Pat in a wig. After this startling revelation, Matt wakes up in his apartment, revealing that the entire sequence was a dream.

Waking up in in TBFP Inc., Matt now has the chance to explore Montreal and talk to his fans (characters submitted by actual fans). After recruiting Pat, they both take a taxi and meet Liam at Woolie's Apartment, who isn't there for some reason. In Woolie's apartment, they discover a strange portal and no Woolie. After some deliberation, they jump through the portal and end up somewhere outside.

Travelling north through the forest, they three arrive at an inn with Woolie contemplating a defenceless pie. After salivating over the pie, Woolie informs the rest of the gang that he found a mysterious amulet in the mail. Unsure of where they are and how to get back home, they decide to rest at the inn for the night. Inside the inn, the Zaibatsu reunites with a woman they've never met, who leads them downstairs to welcome them back to Jogo.

At this point, Pat realises that they're going to have to go through some time travel shit, which explains why the elderly woman knows them. The woman, introducing herself as Samantha (or Sam), returns the weapons the Zaibatsu entrusted to her for safekeeping: Matt's fire axe, Pat's katana, Woolie's staff, and Liam's short sword.

Outside, the village is being attacked by Shades, a mysterious enemy that mostly attacks at night. With their new weapons, Matt's party is able to defeat the group of Shades outside the inn. If the party goes north, they can find the merchant, who will sell healing items, or head west to advance the plot. In the screen transition however, they are assaulted by another group of Shades, only this time, they remember how to use their summons.

After killing the second group of enemies, the party runs into a huge group of bad guys when a distant voice calls out to them. A bald figure approaches them, revealing himself to be David Cage. Suddenly, the mysterious robed figure returns accopomonied with an instrumental version of the Top Gun OST and lightning powers, which convinces the Zaibatsu that he is in fact, The Baz.

When the robed man removes his hood however, it is revealed that is Matt from the future. Just in the nick of time, he throws down another portal for the Zaibtsu to escape. Distraught by the sight of himself, Matt tries to talk to himself but is forced to back down through the portal. Upon exiting, the find themselves on a rural farm, where the Zaibatsu is approached by Plague of Gripes. At this point, the demo ends, with the main story being continued in the main game.

See Super Best Friends: The Video Game Glossary for more details on the references made in this game.

Retrieved from "https://zaibatsupedia.fandom.com/wiki/Super_Best_Friends:_The_Video_Game?oldid=28426"
Community content is available under CC-BY-SA unless otherwise noted.