Super Best Friends Brawl is a spin-off series of Two Best Friends Play in which Matt, Pat, and Woolie play local competitive multiplayer games referred to as 'Brawls'. The series derives humour from the hyped up frustration, tension and increasing butthurt from the trio as the fights come to a close. In addition, this series typically includes relevant clips from various media. 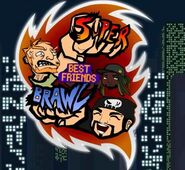 The Spiral Kings
Add a photo to this gallery
Retrieved from "https://zaibatsupedia.fandom.com/wiki/Super_Best_Friends_Brawl?oldid=42015"
Community content is available under CC-BY-SA unless otherwise noted.