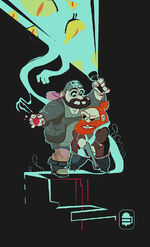 “We appreciate the zaibatsu page, its great!” — Pat

The Best Friends Zaibatsu Tumblr blog was established in July 2013. Since then it has become a symbol of the SBFP fanbase, reblogging almost all the fan content that is posted to Tumblr. It has two mods, Zai, the creator of the blog, and Madame 'Batsu, also known as MannyFanny.

Zai, whose real life name is Marcus, is the main founder of the blog. Upon being questioned, he said he started the blog because he was "bored, and ehh, Nobody else has this blog." Since starting the blog he has held various streams on his twitch channel Zaibat , which he posts highlights of on his youtube channel, has been an active part of the fan community, has been mentioned on various TBFP videos, and he even got to play KI with Matt once. He also has his own blog at mrmarcbot.tumblr.com

Madame 'Batsu, who also goes by MannyFanny or just Manny, is Co-Mod to Zai. She is most known for having an amazing butt and a commanding personality. She often mocks Zai for his nervous nature. But she still loves most of her followers and does her best to make sure nobody's being an ass. She has her own blog at mannyfanny.tumblr.com

Retrieved from "https://zaibatsupedia.fandom.com/wiki/The_Best_Friends_Zaibatsu_Tumblr?oldid=45921"
Community content is available under CC-BY-SA unless otherwise noted.