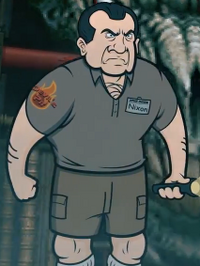 “Name it after the devil. The kids will fucking love that shit!” — Pat, doing an impression of Nixon.

Tour Guide Nixon is a running joke in Two Best Friends Play. In part three of the Silent Hill Downpour full playthrough, Pat used a particular voice that he determined sounded like Richard Nixon, if he were a tour guide in Silent Hill instead of the president. Pat also does this voice in the season four finale, Metal Wolf Chaos.

Tour Guide Nixon is mostly known for insisting that the "kids love the devil" and that everything should be named after the devil because "the kids will love it."

“Did you know that the kids today listen to the Devil Music? If we name this shit the Devil Pit the fucking kids will come here!”
— Tour Guide Nixon

“This town is down with the Devil! They fucking love the Devil!”
— Tour Guide Nixon