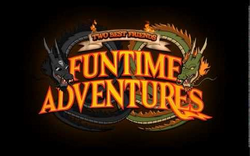 Two Best Friends Funtime Adventures is an animated spin-off series of Two Best Friends Play, that involves no actual gameplay but instead features Matt and Pat exploring different areas in the history and mechanics of gaming while also becoming embroiled in increasingly bizarre and surreal situations. The series is fully animated by 2Snacks.

All of the episodes can be viewed in this playlist.

Matt and Pat discuss various points about gaming in regards of its appeal, mechanics and history as they traverse a bizzare alternative dimension found through a portal contained in a cardboard box belonging to Matt labeled Porn. Through this portal they encounter museums dedicated to video game box art, a hellish plane similar to the setting of Doom/Wolfenstein and deadly Mummy Lobsters intent on making their day as shitty as the Dreamcast. The series mostly focuses on the changes that games have made since their days of origin and whether or not certain concepts have withstood the test of time. The show also features a number of easter eggs and unmentioned references, predominantly to previous episodes of Two Best Friends Play, classic video games, old action movies and My Little Pony: Friendship is Magic.

The title card for the first two episodes
Community content is available under CC-BY-SA unless otherwise noted.
Advertisement