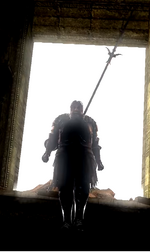 “You're so willing, it's actually suspect.” — Woolie as Woolington

Woolington is the name of Woolie's created character in Dark Souls, named after what was almost Woolie's birth name.

Woolington is one of many hollows struggling to find their place in what remains of Lordran. He is surprisingly skilled at the start of his journey but is prone to falling into various traps due to overconfidence. Woolington is highly paranoid and untrusting of every single person he meets. He especially hates anyone from Thorolund and mocks them with names like Haircut, Bitch Boy and Doofus. Beginning as a pyromancer, he turned to dexterity weapons and the heaviest armors shortly into his journey.

Woolington's story began like many others, awakening within a cell in the long forgotten Undead Asylum. Making his way through the asylum's corridors, Woolington eventually finds his way out and is spirited away by a giant raven to his new base of operations, Fire Link Shrine. Hearing the bell in the distance, Woolington made his way through the Undead Parish, with luck rivaling that of Luck Ted aiding him. Defeating the Belfry Gargoyle's and ringing the church's bell, Woolington proceeded to wander aimlessly until he found himself deep within the Darkroot Basin.

After murdering the last of a docile butterfly species, Woolington journeyed further into the Undead Burg, stumbling upon and besting the local Capra Demon and it's dogs. After seemingly losing his way once more, Woolington encountered the legendary Havel, The Rock and battled himover his jewelry, defeating the warrior and pilfering his ring.

Returning to Firelink Shrine, Woolington was carried away once more by the massive raven and found himself revisiting his former prison. After fighting off the dungeons newest residents and finding a peculiar doll in his old cell, Woolington was forced to flee the asylum when he discovered the demon that had taken up residence in the basement was more than he could handle.

Woolington then moved on to the undead burg, slashing the tires of all those who wishith him ill and rescuing a bitch mage. He ended the life of the Capra Demon within moments and decided to move to the home of his ancestors, a sewer. After rescuing yet another, much more interesting soul, a baller ass pyromancer from the pits of his summer home, Woolington the Lucky headed farther down into the depths and fought what can only be described as a「Vagina Dragon」, of course killing it off without fail in the process.

Add a photo to this gallery
Retrieved from "https://zaibatsupedia.fandom.com/wiki/Woolington?oldid=45689"
Community content is available under CC-BY-SA unless otherwise noted.