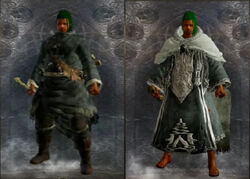 “Let me fuckin' achieve victory you fucker!” — Woolie, as Woolsworth

A sorcerer specializing in Soul Arrows and cheating, he fought against CastorTroy in a challenge to see who could traverse further through Drangleic with the aid of a seasoned adventurer. With the help of Pat, Woolsworth easily overcame CastorTroy, and even defeated The Last Giant, before fading away into the annals of history.

A former cleric who is the supposed descendant of the original Woolsworth. His quest is a long and arduous one, as he journeys through Drangleic, far surpassing what his ancestor accomplished. With the assistance of Navi Pat, Woolsworth II battled many monsters and invading phantoms, and unraveled the mystery of the cursed lands he traversed.

After seeing how weak his Gods had become, Woolsworth II abandoned his teachings in the holy arts and became a warrior, opting to use a large, dull blade as his primary weapon. While initially hiding behind his shield as a meager defense, Woolsworth II came to drop his shield, realizing what he believed was protecting him was ultimately making him weaker. During his travels, Woolsworth II befriended a stranger who gifted him the Mad Warrior armor set, but this stranger would turn out to be Plague, the Woolie Hunter, a phantom whose sole existence was to track down and murder Woolsworth II. Their fated battle was as lengthy as it was grueling, their attacks rending the earth and setting the skies ablaze, but ultimately Woolsworth II was victorious over his long awaited foe. Woolsworth II slew all in his path, including the former king and queen, and took his rightful place on the Throne of Want as the new king of Drangleic.

However, the forsaken kingdom had not yet seen the last of their new ruler, and the book of King Woolsworth II's life still had a few chapters left. After becoming king, he set off on another journey, motivated at the prospect of yet more powerful warriors to face, as well as obtaining his true crown. He first arrived at the Brume Tower, to find a land of ash-like snow, and grand mechanisms. While confused and enraged by the landscape he found himself in, he met the knight he would come to respect more than any other. Raime, diluted by dark as he was, was the most intense battle he ever faced. Their greatswords clashed for many an hour, and in those hours, they formed a kinship, but knew that one of them must fall, never to get back up. Looking back with his fairy companion Navi Pat, he recognised him as the greatest of all knights. He took up Raime's blade, heclaimed the crown, then moved to the land of the Sunken King. Immediately upon enter what remained of the underground civilization, of poison, ziggurats, and the color green, he was immediately motivated to find what this land had to offer. The dragon Sinh was an enigma, sometimes assisting, others, opposing the progress of Woolsworth II. The Squalid Queen who had stood in his way forced Woolsworth II to remove the armor, that limited him as much as it protected him, and she was slain. Putting his armor back on, he then realized he and Sinh must fight. The dragon fell, and Woolsworth II was stronger for it. In the land of Eleum Loyce, Woolsworth met another he would come to greatly respect, the Ivory King. Gathering the knights of Eleum Loyce, he battled the king, lost to the Old Chaos, and was enthralled by it all. A battle lasting 3 hours left Woolsworth II the only one standing, all his newfound allies sacrificing themselves in order to put the Burnt Ivory King and his knights down. He claimed the final crown, establishing himself as the ultimate king, and with the flames he gathered, attained a way to never hollow. Some claim that he may be around for eternity, but knowledge of any further exploits has been lost to time.

Woolsworth II's story may have come to an end, but there are rumors his line continues, beyond the falling of kingdoms, beyond the cycle of light and dark. Some claim that even in a time long before his, there may be an ancestor who bore his name, who witnessed the beginning of the Warriors of Sunlight. But, these are only rumors, and there may or may not be more stories of the Woolsworth line.

Woolsworth II after his change to a STR build

Artist: 4RT3
Add a photo to this gallery
Retrieved from "https://zaibatsupedia.fandom.com/wiki/Woolsworth?oldid=45693"
Community content is available under CC-BY-SA unless otherwise noted.