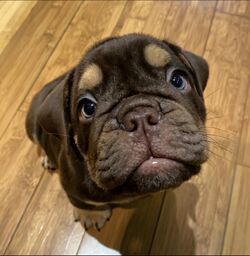 Zangief is Pat and Paige's pet dog that they have accepted as their second child.

Zangief is an English bulldog who was eight weeks old when Pat and Paige got him. Elmo gets a bit agitated about the dog since he's no longer the only Sweet Baby around.

His name is pronounced "zan-geef".

Zangief appears in the following Pat Stares At Twitch emotes:

“It’s very early so at the moment, Elmo is displeased, but that’s very common. He absolutely LOVED having dogs and other cats around when I’ve had roommates in the past, so I don’t think it will take too long before they are good friends or at the very least tolerant roomies. We have been considering another cat or dog for several years specifically FOR Elmo because he enjoys having playmates so much. He just needs to realize Zangief is "a bad guy, but not bad guy!"”
— Paige[1]

“His ear is like a velvet sampler at the carpet store.”
— Pat

Zangief's first appearance, as a big and strong baby

"Zangief took a righteous dump on his pee pad like a good boy yet also somehow got it on the curtains but I’m not even mad just impressed and now he sleep" August 1, 2020 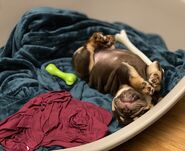 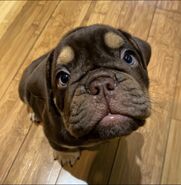 "Zangief loved his car ride and his check-up at the vet went so well! He is in perfect health! #goodgriefzangief" - Paige, Aug 3, 2020

"Happy #InternationalDogDay! My english bulldog puppy Zangief is 12 weeks old and half of his body weight is pee. He fears only the rain and literally his own shadow but enjoys chewing his magikarp, eating leaves (or anything really), and attention just like his father." Paige, Aug 26, 2020

"Help I'm on @PeachSaliva and I cannot move because dog #goodgriefzangief" Pat, Sep 5, 2020
Add a photo to this gallery

Fan art of Elmo vs Zangief by Chrstina Mirajes-Doung

Fan art of Elmo vs Zangief by Chrstina Mirajes-Doung

Zangief's addition to the Pat Stares At stream OP.
Add a photo to this gallery
Retrieved from "https://zaibatsupedia.fandom.com/wiki/Zangief?oldid=52788"
Community content is available under CC-BY-SA unless otherwise noted.