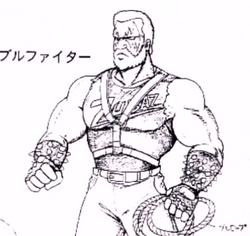 “Can you feel the storm? It's coming!”

Zubaz, also known as The Storm or simply The Baz is a running gag in Fighterpedia that became a major recurring theme in the Best Friends Zaibatsu. Since Fighterpedia, The Baz has appeared in multiple videos and even several games.

Zubaz is a tall, incredibly muscular caucasian man with short blond hair, a full beard and black, jagged patterns around his completely white eyes (similar to Gene Simmons' make-up in KISS), which sometimes surge with electricity. His outfit is comprised of a black gym-shirt with "Zubaz" written on the chest, blue jeans, knee-high black leather boots, black fingerless gloves with spiked wristbands, four brown leather straps wrapped around his torso and a brown belt holstering his rope whip. He has the unexplained power to summon and manipulate lightning, hence being called a "coming storm."

The origins of The Baz date back to 1991, in which he was a rejected character design for Street Fighter 2: The World Warrior. He was first mentioned in the first episode of Fighterpedia, quickly becoming a running gag of the show, appearing in some shape or form in almost every episode, and eventually having multiple appearances and references outside of the series.

The Baz has gone on to appear in Kickstarter games the Best Friends have backed via crowdfunding, with "Mecha-Baz" set to appear in Colossal Kaiju Combat, pledging $1,000 for him to appear as a secret boss in Shovel Knight, and making his debut in Divekick, where he is voiced by Chase Ashbaker.

The following is a list of games Zubaz has appeared in due to Matt and the Zaibatsu's overwhelming generosity (Backer rewards on kickstarter or getting in touch with devs):

The Baz in Divekick.